So I'm set on paring down my internet use for the first month of the new year  and I mentioned it a few times. I was careful to give myself a little leeway with "possible" blog updates and email. And I'm glad I did because I need to say stuff.
Jerome came home from work last night and told me somethin that really hasn't sunk in until just now as I was takin a shower.....
He was headed to his evening job on the freeway. He said that everyone suddenly hit the brakes and almost came to a stop. He went up just a little ways and saw an SUV flipped over against the guardrail with smoke and fire comin from under the hood. He parked far enough away from the car to be out of the clear in case of an explosion and ran back. He passed a lady who had also pulled over and was crying on her phone so he knew that assistance was bein called for and just kept going.
He reached the car as two other men did and as they stooped to look for the driver he saw car seats in the back. He crawled through the broken back window and didn't see any kids. He asked the young man if he had children with him but he was afraid the man was too disoriented to trust his answer. He crawled into the very back of the SUV to see if by any chance a child had been tossed back.
When he saw no one he scrambled out and helped the other two guys carry the man away from the  burning car. He noticed that the man's leg looked broken and out of place. As they set him down they could hear sirens approaching and he knew that help would be there very soon.
And then he ran back to his blazer.
He was about to be late for work. 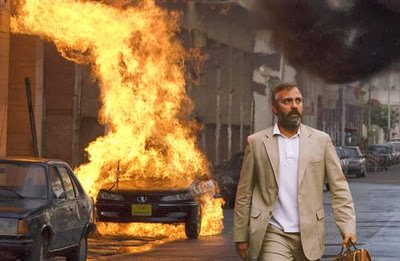 ......................................
I know, right?!
Like, who are you Jerome? Really, who ARE you??
I kept pressing him for every detail last night, I just needed more. I wanted to know everything!
And he answered me but he didn't answer me like Cosmo Kramer. I would have totally been Kramer if that were me. I asked him if he thought about the possibility of the car exploding with him inside. He said "Of course, when I got halfway there. I didn't want to go in either. But I saw car seats"......... I asked him if it was even amazing to him and he told me very matter of fact it was the greatest thing he ever did for someone.
But he didn't expound.
And today he realized that he had tiny slivers of glass in his hands. After working an evening shift at one job and then half the day at another.....
I really don't think the people who know us really get this guy.
I really don't think that I know what I have.
When it was all kinda sinkin in tonight (the shower is the one moment of uninterrupted thought processing for most parents) I started to cry a little. What if that car had exploded?
He had thought of it, as well. Anyone would have thought it.
I can't imagine anything without his presence. He's just what I know, he's part of me. He's been the biggest presence in my life since I was 16. How does anyone carry on after losing a spouse? I cannot even go there and imagine it....... I'm thankful. So thankful. And proud. Very, very proud.

And no, the Huey's haven't jumped the shark.
We have a thousand more outstanding adventures ahead of us yet. ;)