Soooo much awesomeness has transpired in my life since I last hit up these keys. I missed some blogular moments, I sure did. But I got no qualms with a little rewind action. You guys up for some old news? 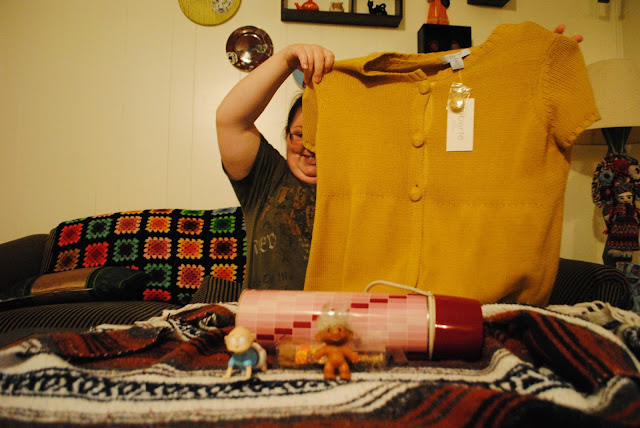 My bestest buddy had a birthday and I got her everything she "needed". 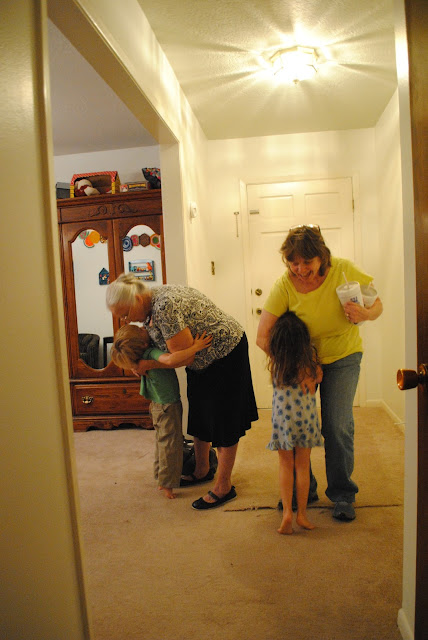 My granny came to spend a week with me!!! She doesn't drive much anymore and lives far away so this was HUGE. I was in hog heaven.... 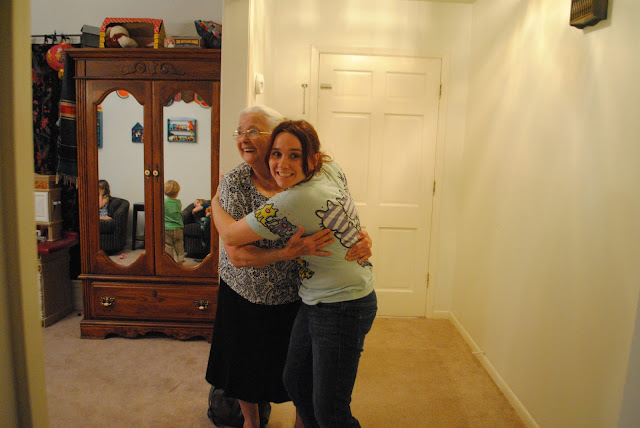 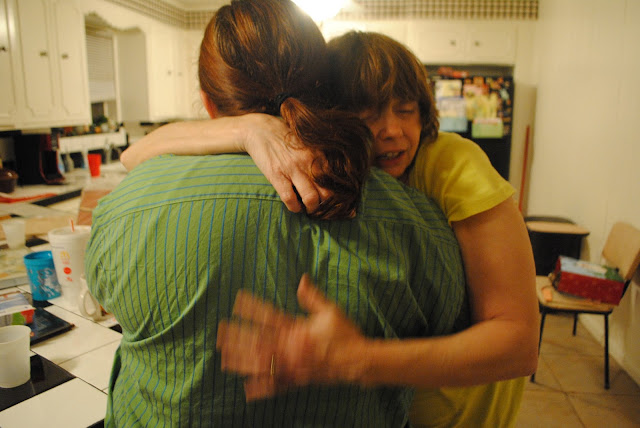 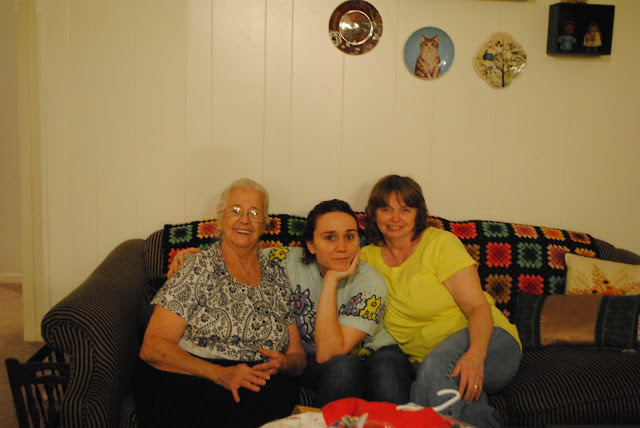 Her and my mom had been stoppin at estate sales on the trip here from San Antonio. They made quite the haul..... 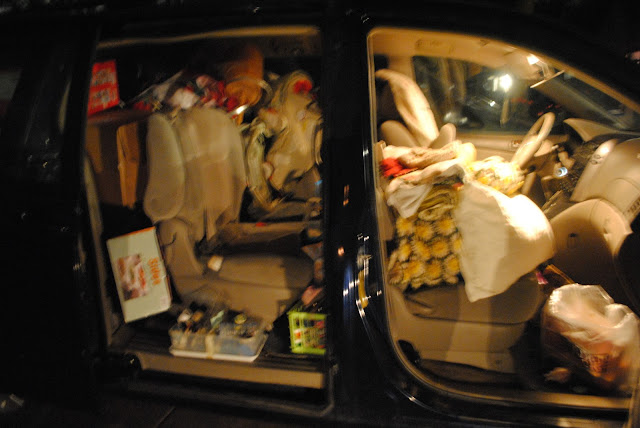 Ironically I had been cruisin around on ebay and etsy lookin for vintage Sesame Street sheets that very afternoon! I saw this exact sheet for $16 for just the flat sheet. My granny picked my son up the whole set for a buck fifty. I tell you, I get that second hand annointing from my granny.....By the way, doesn't my mom look like somethin out of a creepy movie? 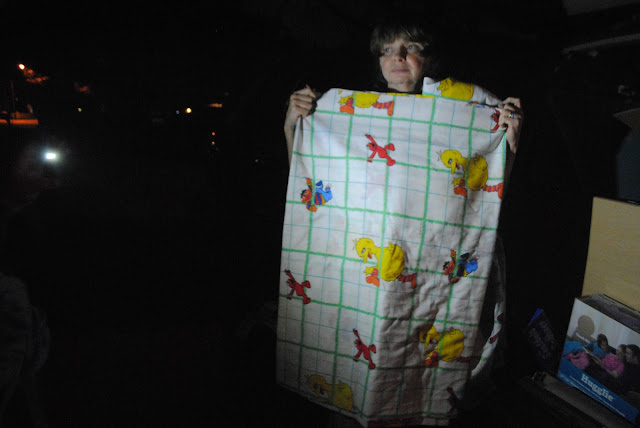 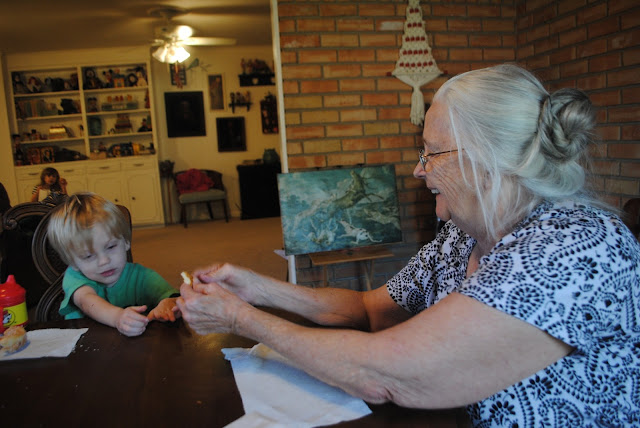 This boy LOVES his granny Sally. 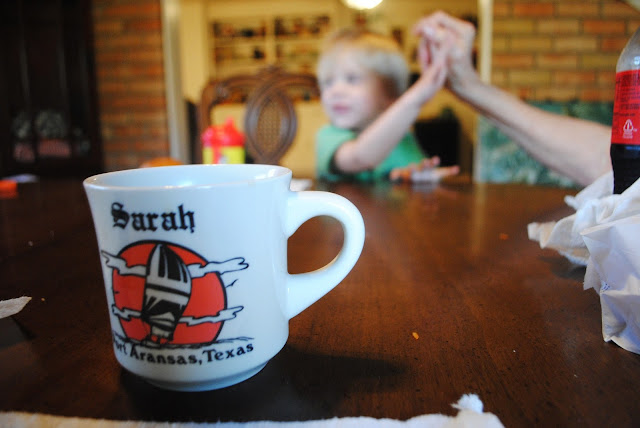 A girl after my own heart

My little chickies are ill and we are stayin in for Texas Christmas (Superbowl). Not that I give a hoot about the game, it's really all about the food table for me ;)
Well, I was just sittin around doin a whole bunch of nothin when Sarah pops up in an interesting look. She' a self dresser, much like I was, and I didn't think much about it. But when she said "Look, mom. I'm the Goblin King" I took a closer look...... 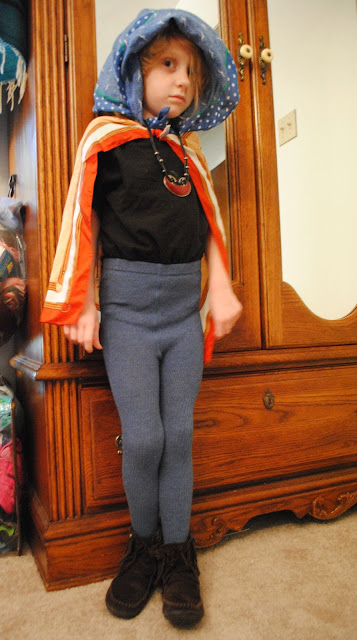 The mega fan in me had to do a quick scan of her outfit's "accuracy". And for a little girl with limited medieval fantasy land inspired garb in her dress up collection, I'd say she did an ace job.
Boy, did my heart swell with sheer pride! 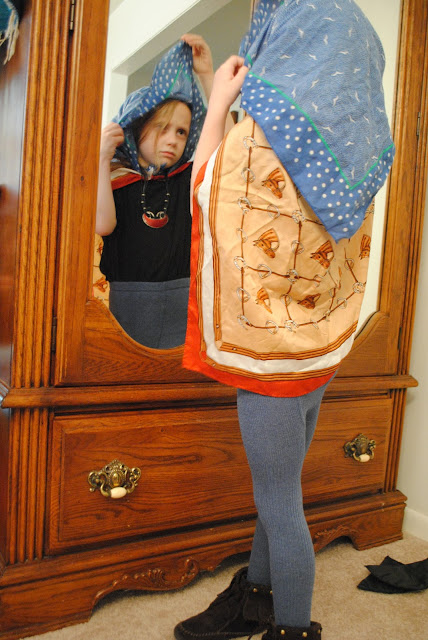 She even ran off to get somethin and came back with a clear ball with bracelets in it. Then she began to say "I have a gift for you Sarah." HA HA! She totally was reenacting a scene from the movie! 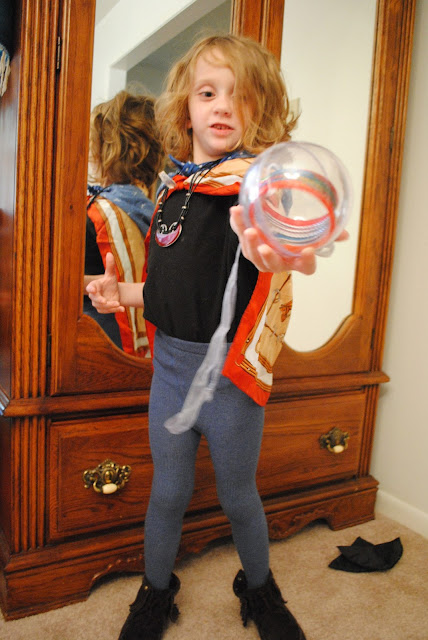 (Who noticed the superfluous shoulder pads layin around? Ha ha!) 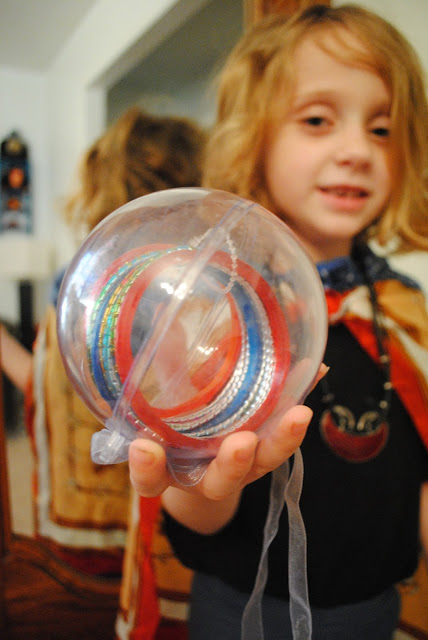 I love this girl. I don't know what device you read my blog on and if you can see the background for it. If you can then you know that I have a definite affinity for this movie. And it may or may not be a coincidence that I named my daughter, Sarah. 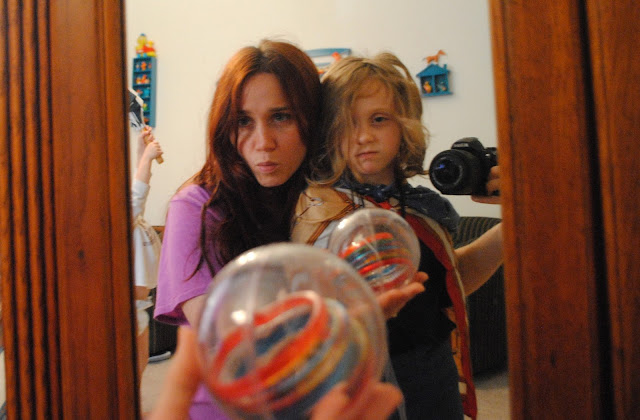 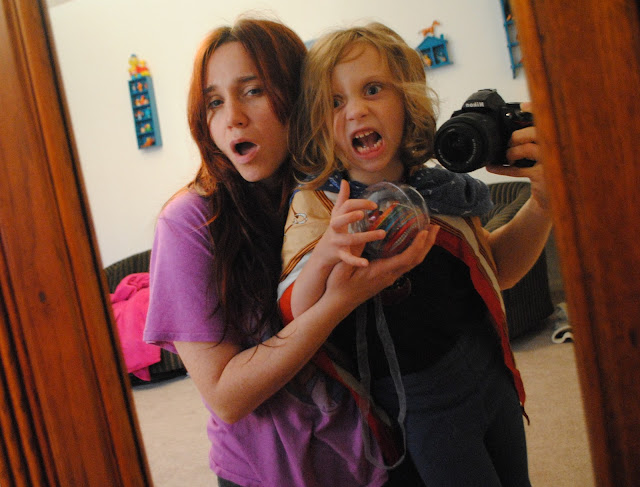 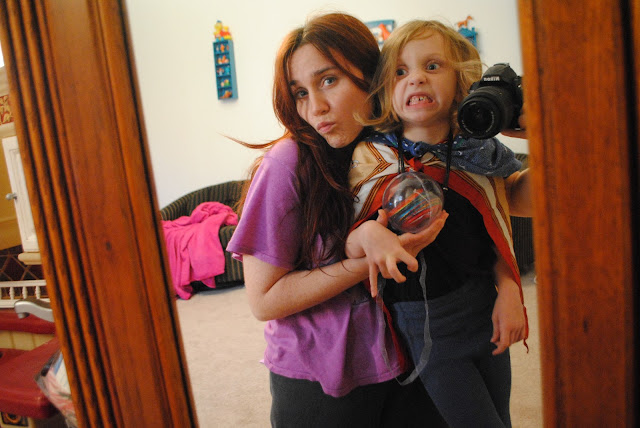 And of course, she had to steal a baby just like Jareth. Sorry Gabe. You'll have to do.... 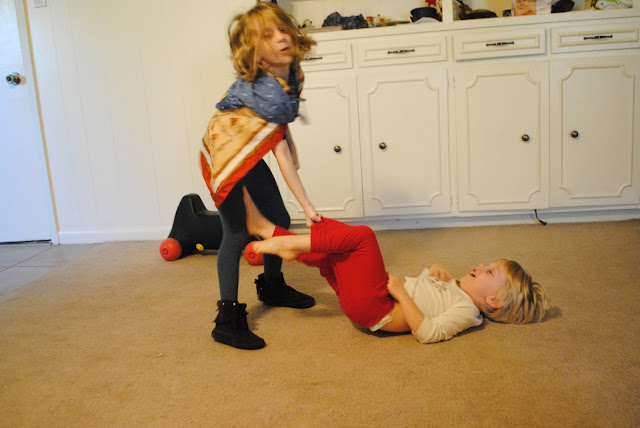 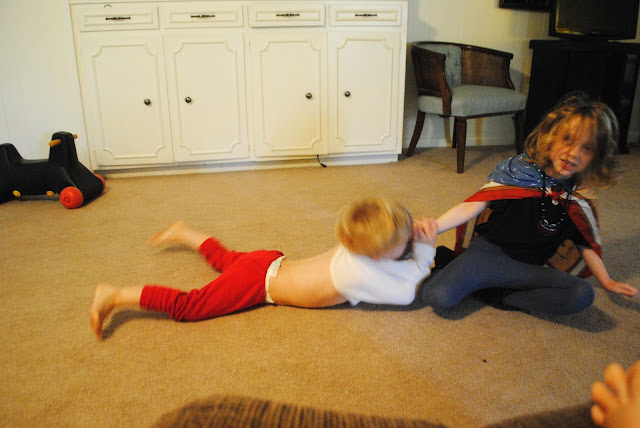 It's not a problem if they're consenting

Today started off kinda forlorn for me. It's been seepin to the surface lately, how isolated I spend most of my life. I got the kids, and a great husband and of course my bestest buddy, Delena but outside of Sunday mornin church I rarely associate with people who know me personally. I wouldn't call it lonely, it's more like daydreamin about havin fun with friends (I'm ridiculous). I was watchin a movie last night (Your Sister's Sister) and at the opening scene there's a group of older folks hangin out and havin a nice time (even though it turns out to be a "hipster" memorial service for their friend) Well, anyway I looked at Jerome and said "How come we don't have any friends we can just hang out with like that? No one wants to just hang out and have some laughs for Pete's sake. I bet if we were like,"hey guys wanna come over and get all drunk at our house" we'd have a huge crowd! ...People, I have no intention of havin a kegger, it was pure sarcasm.....
Maybe it was the frustration of not even bein able to pull together a decent crowd for a housewarming party. Maybe it was the fact that the last 2 weekends we've been cancelled on by the same friends. Maybe I'm just a big crybaby (yeah, I hear your thoughts over there, Delena).
Breathe......
Okay, so on to what made the day awesome. And probably only because I have no blood and bone crowd.
First, the computers were down at the gas station and I had to use my only $10 cash. Right when the drawer shut with my money in it, the clerk says "Oh, hey they're back on". I told him "Man, I needed that cash. That sux."  So as I turned to leave a guy hands me a $10 bill. He said "Here, I been there. It always comes back around." I aint no spring chicken to the laws of giving and receiving. I firmly believe that it does come back, so I just took it without hesitation and said "Thanks, man. What's your name? Are you a Christian?" And he was and we chatted for a bit. His name was Chris and he just moved here from Nashville! I told him, that's so cool cuz I've sent some blessings out to Nashville and even put a lil somethin in the mail that way this very mornin (I can just see some gals grinnin up there after readin that ;)
And here's the next cool thing....

After the other day's score with that hippo I knew there'd be more vintage toys. They just take a little while to trickle outta that back room. And boy were my instincts correct!
A huge $2 Raggedy Andy and this little pink lady. I have a red one that's identical so I bet it was a little pattern that was popular back in the day.
This face is just killin me, folks! I cannot believe this one came home with me :)


I think I blogged about a Donny and Marie Osmond doll set I liked back when I was livin out at my parents. Anyhow, this masculine stud was 50 cents.
We needed one more horse for the local rodeo's stick horse races for the youngster's. Half a dollar for a need well met :)
Okay, they had one up at the front behind the counter that was a tad larger and the sign said it was full of clothes and a barbie for $100. I was like "Pffttt. Yeah, right KCM."
I found this one in the toy section and when I asked at the register how much, the lady looked it over and said "I dunno, 50 cents?" Well, that sounded fair to me ;)
And this was marked $10 but she looked, shook her head in disgust and said "1 dollar, ma'am".
I was only gonna spring for it because the other stuff was so dang cheap.


So, here I am surroundin myself with the hipsters of the toy crowd. They're always game.
And I guess I'll never be asked for loans or babysittin from these guys so this may be alright.
Peace and love, guys :)